Saying as it is Friday the 13th, I thought April’s t.v series review should be a dark and twisty one. (not horror, I dont do will with horror) So I thought I’d choose How to Get Away With Murder.

HTGAWM is apart of the wonderful Shondaland series that includes Greys Anatomy, Scandal and Station 19. The show first aired on 25th September 2014. The show is currently on it’s forth season. 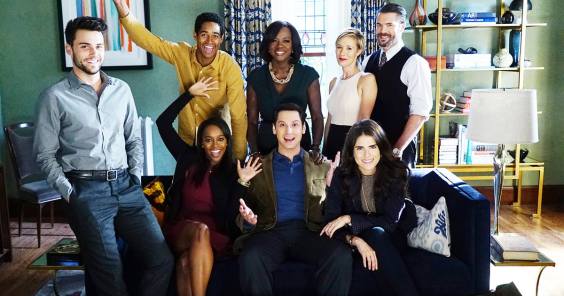 Annalise is a law professor at Middleton University. She is renowned for choosing a group of students to work with her in her law practice. As the new school year begins, a sorority girl goes missing and what the Keating Five don’t know is that there lives are about to be turned up side down.  Everyone is a suspect and everybody has something to hide.

The first eight episodes of the series alternate between flashbacks of December 12th, when Sam Keating was murdered and what events took place in the weeks leading up to the murder. Each episode gives us a coundown to December 12th and shows us in detail how each issue lead to the murder of Sam Keating.

Annalise is a defense lawyer, who teaches at Middleton University. She selects five students who become known as the “Keating Five” to help her on cases in her real life law practice. She chooses Connor Walsh, Michaela Pratt, Asher Millstone, Laurel Castillo and Wes Gibbins.

The main storyline of the series surrounds the murder of Lila Stangaurd who was missing for several weeks. The prime suspects are her boyfriend Griffin and her good friend Rebecca. As Rebecca lives next door to Wes, the pair become “friends”. So Wes convince Annalise to defend Rebecca in the murder case, to which she agrees to do, but what she and her team don’t know is how complicated the case truly is. They are all about to uncover some very confusing and damming evidence. They are all about to be pulled into a world of dark and twisty and there will be no coming back from it all. They are stuck together whether they like it or not.

The first few episode are tough to get your head around, but please stick with it. It is so worth the watch. If you like anything crime or law related, you’re gonna love this. It’s serious, funny, dark and can be a bit gory when you really get into it. Shonda has done it once again. To be fair she could put her name to anything and I would still love it.

I don’t think there is a better person than Viola Davis to play Annalise Keating. She makes you, hate, love, admire, laugh and empathise all in one episode. She plays the part so well and really does the show justice. I think the whole group has great chemistry, there isn’t really one that I could say doesn’t belong in the group or that stands out that much. They all have a different part to play and I just love them as a group. Even though its not a situation that you would want to be involved in, you kinda do want to be apart of the group.

There isn’t a boring episode in the whole series, there is constantly something happening that it just holds you complete attention for an hour. It can be addictive and you just want to see what happens next. It also keeps you guessing, you think you have solved the whole thing and then they throw a curve ball and you have to start all over again.

I honestly would say that you should give it a go. I recently re watched it all on Netflix so that I was all up to date and everything was fresh for the forth season. Let me know what your thoughts are on it or if you have watched it all ready and are up to date with the episodes.

View all posts by passionforlife2017

Welcome to Passion for Life! Thank you lovely people for taking the time out to read and like my posts. There is certainly something for anyone and everyone. Leave a message and give your favourite posts a share.

Happy Friday lovely people!! Enjoy the beautiful weather this weekend! ☀️🌼🌸🌻 #passionforlife #pups #dogsofinstagram #mypup #puppylove #shesthecutest #ontopoftheworld #takingitallin #seaview #beautifulviews #mournecoast
This week is Mental health awareness week, something that I think is something we all need to pay attention to. 1 in 4 of us suffer from a mental health disorder. It is becoming a growing factor for children and teenagers. This week represents the acknowledgment of mental health and promotes that it’s okay to not be okay. We aren’t completely where we need to be in regards to mental health help and care, but we are making huge leaps towards it. ——— It’s something that I take very seriously and have such an understanding for other people who have there own battles with mental health. I also have a massive respect for those who function as best as they can in their day to day life. We need to remember that everyone has there own story and that we can’t compare with anyone. This is my favourite thing about social media, the positive side to it. A lot of people are able to share there stories, they can connect with people who may have advice or need support and yes there is a lot of negative people on social media, but there are also more positive people if you look in the right places. —————- So do one thing for yourself today that makes you feel good. Unfollow all the negative people online. Follow some people who are encouraging and funny and who aren’t afraid to speak about what’s important to them. And one more thing, if you don’t feel good, feel down, sad, anger, go talk to someone, or go write. Do what makes you feel happy and content even if it’s only for a little while. I’m gonna tag some people in my stories that I love to follow and love the stories and advice that they share. 💚💚💚💚#mentalhealthawareness #mentalhealthawarenessweek #itsokaynottobeokay #mentalhealth #mentalhealthmatters #mentalhealthwarrior #mentalhealthrecovery #mentalhealthsupport #passionforlife